One of the central celebrations to Là Fhèill Brìghde is the making of the brìdeag or dealbh Brìde – the ‘Little Brìde’, or ‘icon of Brìde’ as it is called in Scotland, or the brídeóg as it called in Ireland. The brìdeag or brídeóg was usually made by girls (although in parts of Ireland, boys also made and then paraded them), where as in Scotland, the dealbh Brìde was made by the older (married) women of the house.1

In a modern context, this can be an ideal activity for a group, a family, or even on your own, as part of your celebrations. The icons were originally made from sheaves of corn, saved from the harvest, although larger effigies that were to be paraded around the village (in Ireland, specifically) were often made using a churn dash which was then dressed and padded out to make it more lifelike.2 In more recent times, corn might not have been used at all3 (sometimes a child’s doll was specially decorated for the occasion, if a dolly wasn’t made from scratch), so using modern materials to make the icon can easily be seen as being within the continuum of practise. For many, corn can be hard to come by and the more modern materials available could be said to be more relevant to their circumstances as well.

The icon can be as large or small as you want, and as simple or as complicated as you like. You can use natural or manmade materials, and be as garish or tasteful as you like, and there are any number of different ways you make the doll itself – wire and beads, pipe cleaners, clothes pegs, papier machè, modelling clay, marzipan or icing (for something that’s easily biodegradable, if that’s a concern), sew it, or knit it. If you decide to sew or knit a brideag then you can easily stuff it with herbs to make it smell nice.

Most art and craft stores have kits you can buy if you’re not feeling too confident in making something from scratch, but these can be expensive. Glitter and sparkles tend to be cheaper in toy shops that have an art and craft section, and will always appeal to younger children if you want to make it a joint effort. Alternatively, small shells, pebbles, sticks, bark and anything else you can find outside would make cheaper, more natural decorations.

In decorating the dealbh Bride, I tend to take into account the area I live in (which is coastal), so I often use beads in the shape of starfish, shells, fish and so on for decoration. Since the act of making the icon itself is essentially devotional, personalising it in this way helps me to visualise her making her visits in the area for the night.

As you make the icon – especially in a group – you can set the scene with music and traditional songs, stories or poems and some good food and drink (if you haven’t already eaten). There are plenty of songs, stories and poems to choose from that would be appropriate for the day. As much as it can be seen as a devotional, it should be a festive occasion, too.

In the past I’ve made the dealbh Brìde a day or two before I celebrate Là Fhèill Brìghde because with a young family I find it a bit much to fit everything in in just one day. It makes it easier to get the children involved too.

Finally, here are some examples of the dealbh Brìde that I’ve made in the past (some have been more successful than others!); the ones here are some of my favourites:

This one is made from a kit I bought. I’d love to be able to get another one but they seem to have been discontinued now: The kids (then aged three and five) helped with these: Another joint effort with the kids, they insisted Brìde needed a crown: 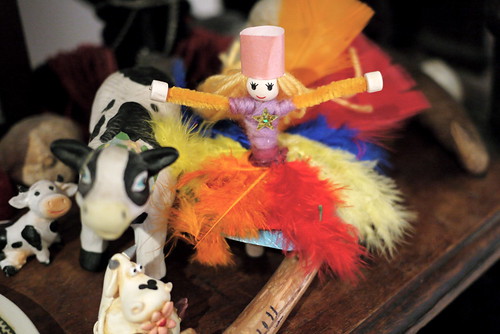 My daughter (aged six) did this one, with a little help from me. She decided that Brìde needed some animal friends to keep her company: 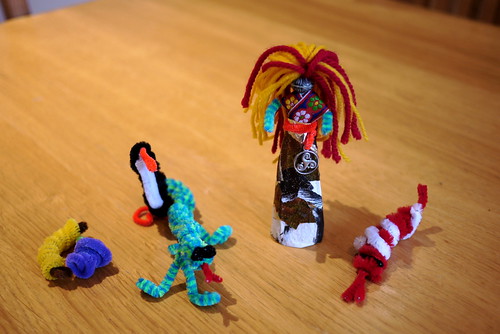