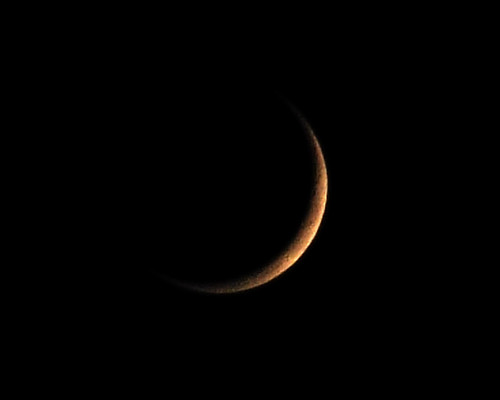 The new moon by Paul Tomlin

While there is no hard evidence for sun or moon worship in Scotland or Ireland (in the sense that the moon has been deified, or associated with a particular deity), the moon was particularly important in a time before streetlights because typically it would provide the only source of light at night by which a person could travel safely. Given the often dangerous environment to be travelled – such as the sea, or moors, the moon was therefore a very welcome addition to the night sky.1

It’s no surprise, then, that there are a wealth of beliefs and customs associated with the moon and its various phases throughout the month and the year. The new moon (lochran mór an àigh – ‘the great lamp of grace’)2 in particular is held in high regard according to the surviving lore, and most of the songs and prayers recorded by Carmichael that are dedicated to the moon are meant to be sung at the sight of the first sliver in the sky. At the summer sheilings, which were mostly populated by women, the first sight of the new moon was a time for much merriment and singing to it, and Carmichael gives a rather romantic description of how such a scene might have looked on South Uist: “At the summer shielings there might be a dozen or two dozen women and girls, with a sprinkling of men and boys, singing and dancing, carolling and prancing, upon the green grass under the shining light of the moon, the moonbeams shimmering upon the clear lake below, while the fleecy clouds moved slowly above, showing the blue, beautiful sky in the far away distance, with the projecting rocks and the heath-clad everlasting hills at hand…”3

This first sliver seen in the sky is called gob soillse (’the bill or beak of the light’),4 and it’s said that this is the time for sowing and planting seeds, since the waxing moon (fàs)5 encourages increase and growth. There are certain exceptions to the rule however, as it is said that plants such as onion and kale will run to seed if planted at this time.6 On Orkney, it is the traditional time for weddings to take place, and it is also generally considered to be a good time to set out on a journey.7

It is also considered lucky to cut hair during the waxing moon, and Grant writes that in the Highlands some mothers deliberately cut a lock of their children’s hair to maintain their luck.8

During the March waxing moon in Moray, withes of woodbine were traditionally cut and made into wreaths, which were then kept for a full year before being used to heal fevers and consumptions in children by passing the sick child through the wreath three times,9 though generally things like timber and rushes should be felled during the waning moon.10 For a long time it was considered unlucky to see the new moon through a window, rather than out in the open. Upon catching sight of the new moon people should greet it respectfully with a tip of the hat or a nod towards it, and to ensure good luck a silver penny (called the peighinn pisich, “propitious penny”) may be turned over three times in the coat or trouser pocket.11

The full moon is bolg reothairt (‘the swollen womb of the spring tide’),12 and the time of the waning moon is called san earra-dhubh (‘in her black boundaries,’ or more literally, ‘in her black tail’).13 The waning moon is considered to be the perfect time for ploughing, reaping and peat cutting – otherwise the peat won’t dry out properly or give proper heat.14

According to the lore, animals are supposed to be castrated during the wane of the moon, but it’s not considered appropriate to kill animals for meat during this time because, according to an old man in Eigg, “The flesh of an animal is then without taste, without sap, without plumpness, without fat.” He also commented: “Neither would they cut withes of hazel or willow for creels or baskets, nor would they cut tree of pine to make a boat, in the black wane of the moon. The sap of the wood goes down into the root, and the wood becomes brittle and crumbly, without pith, without good. The old people did all these things at the waxing or the full of the moon. The men of old were observant of the facts of nature, as the young folk of today are not.”15

During the dark moon, the night is called rath dorcha (‘dark circle’).16 Moons in different months also have their own titles, and so the harvest moon (second moon in autumn) is known as gealach an abachaidh – ‘the ripening moon’ – since it’s said that the crops ripen as much by the moon at night as they do by the sun during the day, much like the first moon of the winter, gealach an ruadhain, ‘the reddening of the moon,’ which is said to be a time when vegetation grows as much during the day as it does at night.17

The ripening moon is followed by gealach buidhe nam broc, ‘the badger’s yellow moon,’ when it’s said that badgers are stocking up on their winter food. The last moon in the harvest season, before Samhainn, is gealach an t-sealgain, ‘the hunter’s moon.’18 The following rune, Carmichael tells us, was said upon seeing the moon and stars, “When a man comes out at night to see what the night is doing…” I love the imagery of this one:

Of all the songs recorded by Carmichael (many of which tend to be variants of each other), this is one of the simplest and most easily adaptable into reconstructionist practice, to be said when greeting the new moon:

1 Carmichael notes, “The moon was of more concern than the sun, for by day, whether the sun was visible or not, the people could thread their way through their intricate tortuous reefs and rocks, fords and channels. But they could not do this on a moonless night except at the peril of their lives. This is one reason for the many odes and hymns addressed to the gracious luminary of the night.” Carmina Gadelica, 1992, p630.