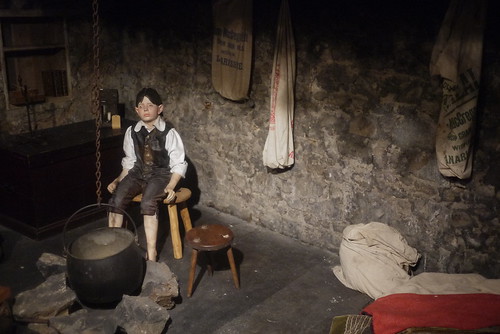 Each household would have a hearth fire over which all the household food would be prepared, and around which the most important aspects of family life would happen. The hearth fire would traditionally have been kept alight all year long in both Scotland and Ireland, with the exception of Bealltainn eve when it was extinguished and then relit from a flame brought from a communal bonfire to ensure health and prosperity upon the household in the coming year.1 It was a matter of pride and superstition not to let the flame die out even in the height of summer, and many households could boast that their hearth had remained alight for several generations – even centuries. If the fire did die out, it was said “the soul goes out of the people of the house.”2

Smooring, therefore – a Scots word usually translated as ‘smothering,’ but perhaps more accurately ‘subduing’3 – was a process by which the fire was dampened down so it would not need tending, and therefore could be left safely alight during the night. In Ireland, it was said that the Good Folk would be displeased if they arrived at a house during the night to find that there was no fire for them.4

Smooring a peat fire – as most were until coke became readily available – was usually done by covering the embers with ash. In Scotland, where the traditions associated with smooring have been well recorded, the embers would sometimes be made into a circle and then split evenly into three parts, each part representing an aspect of the holy Trinity. Peat was laid in between each section in the name of the God of Life, the God of Peace and then the God of Grace, and the ashes were spread on top in the name of the God of Light. The resulting heap was called Tula nan Trì, the Hearth of the Three, and when the smooring was complete a prayer (like the one below, from the Carmina Gadelica) would be said as the housewife closed her eyes and stretched her hands over it.5

In Ireland, a charm such as this was said as the fire was covered with the ashes:

(I save this fire, as noble Christ saves;
Mary on the top of the house and Brigid in its centre;
the eight strongest angels in Heaven
preserving this house and keeping its people safe.)”6

In Scotland, a spark was supposed to be dropped into the foot-water (water in which feet have been washed) before the housewife began the smooring, and other superstitions such as dismantling the quern and placing any carded flax under a weight were also observed before placing the besom against the door and retiring to bed, in order to ensure there were no unwanted supernatural visitors during the night.7

These days it’s not really possible for most households to keep a flame burning all year round, if at all. As a result, the ritual becomes more symbolic, something to be done as you go up to bed and make sure all the lights and appliances are switched off, for example. The following rune is just one example of a smooring that was recorded by Carmichael. I tend to visualise the sacred three as being the gods, the ancestors and the nature spirits:

1 See the section on Bealltainn.

6 Ó Súilleabháin, Irish Folk Custom and Belief, 1967, p20. Dames gives a similar version of such a smooring prayer, presumably from the same source (but slightly truncated):

I cover this fire
As noble Christ did.
Mary on top of the house,
And St Brigid in its centre.

8 A chomraig is given to mean “to surround” by Carmichael, the word isn’t in any Gaelic dictionaries (that I can find). Given the fact that Carmichael had notoriously bad spelling (even in this one, the original has “numh” instead of “naomh” in the first line – though the pronunciation would be about the same). The nearest word I would guess “a chomraig” could be is coimrig, which Dwelly gives as meaning “tangle,” i.e. the prayer’s intention is to tangle up all the bad so it can’t have an effect. “Surround” here is possibly given because it flows better in English. It may, of course, be an otherwise obscure word that simply isn’t listed in the dictionary. An tula translates literally as “the mound;” a poetic reference to the hearth and referencing the tula na Trì. Song 84, Carmichael, Carmina Gadelica, 1992, p94.