The Processions and Bonfires 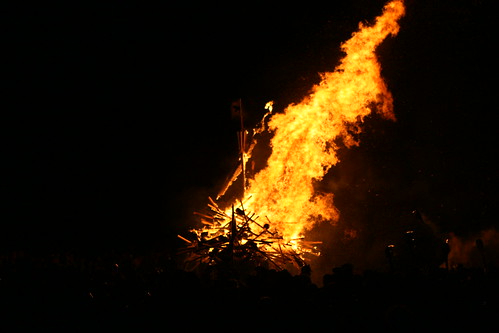 So far the main focus of the traditions that have been detailed here have been on the home, and the spreading of cheer to other households in the community. There were, however, community-based rites as well, some of which still survive today as grand spectacles and tourist attractions.

At Biggar, a bonfire is lit on Hogmanay – “a fiery farewell to the Old Year”100 – a tradition that’s gone on for as long as anyone can remember. The modern celebration of Up-helly-aa in Lerwick, Shetland, is more recent in origin – dating from 1882 after the original processions were banned in 1874 because of too much ‘rowdyism’ taking place.101 The Burning of the Clavie at Burghead is also world famous. Aside from the bonfire at Biggar, in the Borders of Scotland, these communal festivities take place along the north and east of Scotland, where Norse influence was strongest. All of them are reminiscent of the Yule fires, repackaged and reinvented for the New Year, but harking back to their decidedly Norse origins.102

The bonfire at Biggar is still held today, and such is its tenacity that even during World War II, when the country was under blackout conditions (where no lights were supposed to be seen outside at night – no streetlights, no cosy glow from house windows – certainly no bonfires – to prevent German bombers from homing in on targets), the bonfire was still lit. Albeit in reduced circumstances: McNeill records that while the bonfires were banned by the blackout, the housewife of the house nearest to the bonfire site would go out and light a match at the stroke of twelve in order to welcome in the New Year.103

Under normal circumstances, the bonfire is lit by a local member of the town at around 9.30pm to much cheering from the crowd:

“An old custom, recently revived, is to toast red herrings before the flames and eat them on the spot. The fire burns on for hours, and there is no getting the children to bed. The various places of refreshment remain open, and the fun goes on until within a minute or two before midnight, when a brief hush precedes ‘the chappin’ o’ the Twal’ from the Church Tower. As son as the last stroke has died away, there is a pealing of bells, and the whole company joins in Auld Lang Syne. Then daftness descends on the town. The lads are up to all the old pranks, lifting gates from hinges and casting them into unsuspected places, removing shop shades, and so forth. The ‘wee sma’ oors’ are spent in first-footing, for which the Mercat Cross makes a convenient starting-point; and eventually the tired revellers return to their homes and tumble into bed.”104

Such was the revelling in Lerwick that the original celebrations were banned in 1874, since it often ended up getting out of hand. Up-helly-aa was originally a festival where tubs of tar were set on fire and then dragged by chains through the streets with much cheering and blasting of horns by the lads who were doing the dragging, and this was followed by the “exuberance” and “rowdyism” that resulted in the City Fathers clamping down on it. The tar-barrelling was revived in 1882, however, by a formal committee. In 1884 a torch-lit procession was added to the proceedings, and then a full-size galley was added in too, making it much more of a spectacle.105 To this day the committee continues to make the arrangements for Up-helly-aa each year, with Guizer Jarl (earl) elected annually to organise everything.

At Burghead, the main focus of the procession is the burning of the Clavie (cliabh, a basket). Again McNeill provides a detailed description of what took place:

“The procession makes first for the harbour, where the Clavie casts a path of light across the blackness of the sea, and then proceeds to make a circuit of the old town… Every now and then a burning faggot is flung in through an open house door. There is a scramble to get possession of it, for faggots from the Clavie are “lucky” and not so long ago were firmly believed to be a safeguard from the evil eye. The Clavie-bearer finally draws up at a large grassy knoll known as the Doorie…At one time, a circular heap of stones used to be piled up in readiness and the burning Clavie fixed in the centre; but in 1809 a fretstone pillar was built for its reception, the spoke fitting into a socket in the centre. After circling the knoll sunwise, the king and his crew lead the crowd to the summit. As soon as the Clavie is deposited, fresh fuel is piled on, and when the skipper, greatly daring, climbs up and pours a lustration of tar on to the glowing mass, there is a tremendous cheer. Great flames shoot up into the black night and throw a fantastic glow on to the circle of upturned faces.106

The circling of the boats with torches can be found at other fishing ports as well, and there is record of the practice being carried out as far back as 1655 – much to the disapproval of the local ministers of Alves, Drainie and Duffus. Attempts were made by the Kirk to ban the practice, but these were unsuccessful, since it was seen to bring blessing to the land and sea, and nobody wanted to give it up.107 Up until the late nineteenth century in Burghead, the Clavie was taken to a boat in the harbour, readied for sea, and a handful or two of grain was thrown upon the deck, and with a libation of fire-water she was renamed “Doorie.”108

The protective, saining qualities of the fires are obvious, with the focus on the well-being for the community as much as for the individual, even though they have generally devolved into nothing more than a fun gathering, for the most part.

The New Year in Ireland

The New Year was not greeted with as much enthusiasm in Ireland as it was in Scotland, and by and large most of the traditions that can be found to be associated with the day can be seen to be concentrated in areas where Scots influence is most apparent – first-footing being a prime example,109 and again the preference for a dark-haired man being the first-footer can be seen, or else a black cat.110

By and large, the belief in the daoine sìth being abroad on New Year’s Eve was enough to keep most people indoors, but in County Down, groups of lads would make ‘wisps’ of straw and give them out at each house in the hopes of receiving a gift in return.111 In Rathlin Island, County Antrim, an almost identical custom of sheepskin-clad beggars can be found, and this seems to be “purely Scottish” in origin.112

And as in Scotland, the year was often welcomed in with some ceremony. A good bellyful of food was had to make sure that the coming year would bring the same with it, and so New Year’s Eve was often known as Oiche na Coda Móire (the Night of the Big Portion).113

Another rite aimed at ensuring food and plenty in the coming year involved the solemn ceremony of pounding a cake, a Christmas Loaf,114 against the door and sometimes windows of the house:

“In west County Limerick…the cake was rapped upon the door with the words:

(Happiness in and misfortune out  from this night
Until a year from to-night
In the name of the Father and of the Son and of  the Holy Spirit, Amen.)

Many farmers repeated the ceremony at the door of the byre, to ensure plentiful fodder for the cows.”115

Sometimes the cake was thrown through the door instead, for someone else to catch it on the other side of the threshold.116

Given the complicated history of the Reformation in Scotland, and its effect on the celebration of Christmas, the transferral of many of the traditions to Hogmanay means there is a certain amount of overlap between the two festivals – the guising, the emphasis on the fires, the feasting and gifting, the fires, and so on.

The ease with which the practices seem to have shifted and melded into a whole means that it is difficult not to consider the whole season, rather than just one day or the other, and the Norse influence on the customs and rites cannot be ignored. And yet they are also uniquely Scottish, and this cannot be ignored either.

Of most importance was the reciprocal nature of the rites: the giving of song, entertainment and blessings in return for gifts helped to positively reinforce the social ties of the community, with everyone taking their place in the proceedings. Other members of the community brought blessings to the individual homes, but also the community as a whole would act together to ensure the continued prosperity and well-being of everyone, in the gatherings and processions that can be found – many of which are still held today.

At such a liminal time – on the threshold of one year and another, many precautions had to be taken to avoid taking any leftover negativity, or attracting fresh malign influences, during the course of the night. The outcome of the approaching year hung in the balance, with the carefully observed traditions aimed at steering it in the right direction while the fire burning brightly in the hearth in each home gave light to hope for the future.